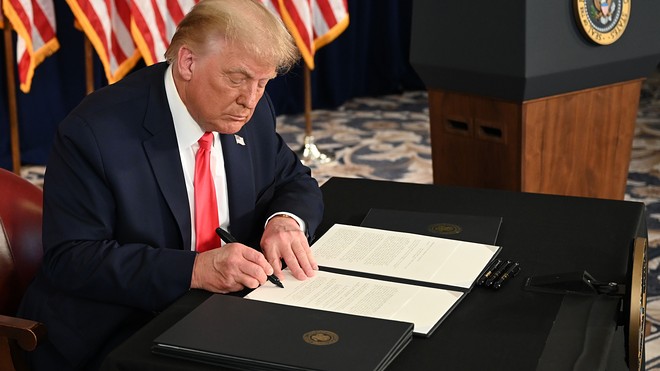 Last week, we gave our analysis of the latest campaign vow President Trump made after signing an executive order to defer employee-side payroll taxes for the remainder of the year.

Both employees and employers contribute an equal share of the 12.4% Federal Insurance Contributions Act (FICA) tax that funds Social Security and Medicare—6.2% each. Under the executive order, employers will still be responsible for contributing their half of the FICA tax, but employees will NOT have to contribute their half until January 2021. At that point, all deferred payroll taxes would be due to the federal government unless a future legislative action is made to change this.

All that has definitively been placed into effect is this deferral of payroll taxes for the rest of 2020. And while this deferral definitely does have some ramifications for Social Security’s overall financial health–and potentially employees’ financial health when they are responsible for repaying those taxes in January—this executive order does not constitute the “defunding” of Social Security or any major change to the program itself.

Recent concerns from Social Security advocacy groups that Trump seeks to “defund” Social Security stem from a separate August 12 statement made after the signing of this executive order (the President makes his statement regarding terminating the payroll tax at 38:25 and 56:45):

To be clear, this has NOTHING to do with the deferred payroll tax executive order. This was a completely separate statement made regarding his goals should he be re-elected in November. So this is nothing to be confused with what was actually put into action. The executive order signed on August 8 does NOT terminate the payroll tax nor does it forgive the taxes being deferred.

We’ve been reading your responses to our analysis of these statements and those of other news outlets and advocacy groups. This is something that has generated a LOT of controversy and confusion, so we thought it would be valuable to clarify the alarm so many of us have about this campaign vow and answer some of the criticisms and questions our supporters have.

Has the President DEFUNDED Social Security?

No. The President has not and is not proposing to make any permanent, significant alterations to Social Security’s funding during his current term.

Nothing Trump did on August 8 defunded or significantly altered the Social Security Trust Fund or its funding mechanism. He merely ordered the Treasury to defer all employee-side payroll tax collection until January of next year.

Now, there are definitely some legitimate concerns with doing that. Obviously, any kind of preventing payroll tax contributions from getting into the Trust Fund is risky given Social Security’s unstable financial state, BUT, this is all money that WILL be collected in full by next year.

Our personal take on this stimulus strategy as seniors’ advocates is simply that it doesn’t do anything to help seniors. Retirees won’t benefit from a payroll tax cut because they no longer work. It’s a strategy that largely leaves seniors and their needs completely out of the equation.

We also think there’s something to be said for how much this will ultimately benefit those still working. Many employers will inevitably still deduct these taxes from their employees’ paychecks to protect them from incurring a huge tax bill later. And for employees living hand-to-mouth whose employers do not continue deducting the tax, we wonder how harmful a large tax burden come January could be. But admittedly, that’s a completely different discussion.

Is the President talking about the federal income tax or the Social Security and Medicare tax?

Is Trump proposing to defer federal income taxes or the Social Security tax? Which tax is he planning on terminating?

The federal income tax and the Social Security tax are two SEPARATE taxes deducted from a worker’s salary.

The Social Security tax—also the Medicare tax—is known as FICA. Though it’s deducted right along with your income tax, it is not the same thing as your income tax. It’s THIS tax that we commonly call “the payroll tax.”

So when the President says he aims to “terminate the payroll tax” if re-elected, he is talking about FICA.

To be certain of this, we can take a look at the full text of the executive order he signed on August 8.

In section 2, the executive order states, “the Secretary of the Treasury is hereby directed to use his authority pursuant to 26 U.S.C. 7508A to defer the withholding, deposit, and payment of the tax imposed by 26 U.S.C. 3101(a)…”

In the Internal Revenue Code, 26 U.S.C. 3101(a) specifically deals with a worker’s contribution obligation to Old Age, Survivors, and Disability Insurance. In other words, the 6.2% all workers contribute to Social Security.

This would mean the executive order is specifically giving the Secretary of the Treasury an order to defer FICA, NOT the federal income tax.

In his later campaign vow, Trump said that he would forgive the “payroll tax” deferred by his executive order and ultimately aims to terminate “the payroll tax.”

It’s also worth considering the federal government itself doesn’t generate revenue. It relies on the taxes it levies on American citizens to fund everything it does—primarily income taxes. While many politicians seek to decrease or restructure that burden for the benefit of the public, there’s absolutely no way Congress would seriously consider TERMINATING the federal income tax. Because THAT would effectively defund the government.

Did the President say he would “defund” Social Security?

The FICA tax funds 90% of Social Security’s income. The rest comes from interest earned on that which the government borrows and repays. Therefore, terminating FICA WOULD defund Social Security in it’s current form.

Didn’t the President say Social Security would continue to be paid and would be protected?

This brings us to our analysis of last week and why so many Social Security advocates are raising the alarm.

We, and many other groups, do not view this as a protective move for Social Security. In fact, it would be a change that would fundamentally alter the DNA of the program, potentially opening a Pandora’s Box of issues that could seriously detriment the reliability of the program as a whole:

But by putting Social Security on-budget, it ceases to be the budget-neutral bipartisan solution it was always intended to be. We will no longer be able to say Social Security doesn’t drive up the deficit because it will. And that could open up Social Security to criticisms and attacks that could never be made in earnest before.

By asking workers to contribute to the Trust Fund in return for a retirement benefit based on what they’d contributed, Congress came up with a genius solution to provide for vulnerable retirees. Workers would happily contribute and would be able to accept those benefits with a sense of entitlement and pride, and the retired population most at risk during the Depression were spared from poverty.

It’s because of the payroll tax that Social Security is not considered by the public to be a welfare program. Beneficiaries are merely receiving that which they’ve spent their working lives to contribute for the very purpose of receiving the benefit later. It’s not viewed negatively in the way that traditional social welfare programs tend to be viewed. It’s not welfare—it’s an insurance policy.

Without workers making contributions toward their own benefits, we have to wonder how the program could come to be viewed in time—not just by politicians seeking to slash national debt, but by the whole of the public. Is this something the public could come to reject in time based on the same values and beliefs Congress sought to appeal to in 1935?

The thing that makes Social Security a non-negotiable financial obligation is that contract and the FICA tax we pay. We put money in, therefore, we take money out. Social Security belongs to us.

So what happens when we stop paying in? Sure, we all pay federal taxes, but that’s just the money we pay to fund the government in general. If Social Security goes on-budget and we stop contributing trillions of dollars specifically to fund it, what implications will that have for our benefits? Is Social Security even going to be considered an “entitlement” anymore?

And during times of financial turmoil and rising deficit, how do we ensure scheduled benefits will always be paid if there is no longer a dedicated source of funding? Will going on-budget make Social Security susceptible to cuts in a way that would never be tolerated while we’re all paying FICA?

And if we’re no longer paying a percentage toward our benefits based on our earnings, could this have an effect on the amount of our benefits later? Will Congress stick to our earnings record and base our benefit amount on what we’ve earned, or will this open the door to an overhaul of how benefits are calculated?

All of these are perfectly legitimate questions to ask in the immediate announcement of this campaign goal. And they’re questions the President needs to answer long before he’s in a position to execute this plan.

Though that surplus has technically already been spent, the federal government regularly redeems those IOUs with interest to pay current benefits. Currently, it owes around $2.8 trillion to American retirees.

But if Social Security was put on-budget, there would be no “trust fund” for the Treasury to pay back. All of that money—and all of the obligations to repay it—would presumably be absorbed into the general budget. The Treasury would no longer owe anything back to seniors. It would be completely absolved of the money it borrowed from Social Security.

Even if there was some way to pay all of that money back, there would be no way to do it fairly. That $2.8 trillion represents the contributions of generations of past and current workers. Supposing the Treasury took that money and distributed it to all of our retirees and started from scratch, it would be brutally unfair to young workers who paid into that surplus and are nowhere near retirement age.

So, we have to view putting the Trust Fund on-budget as a move that would necessarily stick all of the money we’ve built up that was ONLY intended for Social Security use in the general budget. And a move that would immediately forgive all of the borrowing and all of the interest owed on that borrowing. That just isn’t fair.

All of these considerations are why we and many others question this proposal despite repeated promises that Social Security would be protected and continue to pay beneficiaries. Until we have a detailed plan that addresses all of these concerns, we aren’t able to say for certain if moving Social Security on-budget would protect it.

This proposal is far from just a financial change—it’s a massive ideological shift for the program, too. And with that comes a lot of room for vulnerability.

Because of that, this can’t just remain a casual campaign promise. We need a complete analysis of how such a shift would be imposed and how benefits would remain secure in an on-budget system.

Our criticisms do not come from a bias against the President or in favor of his critics. They come from a dedication to program that’s given millions of people financial security during retirement. We ask these questions not to attack, but to understand—and to make sure our elected officials understand the potential gravity of this proposal, as well.