Politicians first started calling Social Security the “third rail of politics” in 1982 after a massive backlash against an entitlement reform proposal put forth by President Ronald Reagan.  When first proposed, it would have had the immediate effect of significantly reducing benefits for those taking early retirement.

Thanks to huge public outcry, Reagan’s administration was forced to go back to the drawing board to develop a reform strategy that wouldn’t push such dramatic and immediate cuts on so many American seniors.  This lead then Speaker of the House Tip O’Neill to famously liken any attempt by a politician to tamper with Social Security to grabbing an electrified train rail — do it and get electrocuted.

Thirty-five years later, Social Security reform is once again front and center in Congress — and with benefits projected to be paid in full until 2034, we are rapidly running out of time to make some big decisions regarding the future of Social Security.

And if recent surveys and polls of American voters are any indication, the third rail of American politics is still incredibly high voltage.

A recent polling memo compiled by Social Security Works — featuring data collected between 2014 and 2016 — shows just how much. 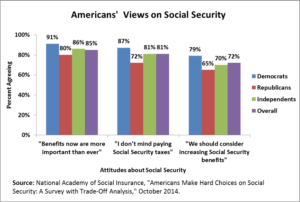 Despite 35 years, it looks like American opinions across all demographics and party affiliations haven’t changed: not only do most Americans agree that seniors should never face painful cuts to their benefits, but most working Americans — including the very wealthy — would gladly contribute more to make sure those cuts don’t happen.

These results also send our elected officials another important message: 35 years may have passed, but the third rail of American politics is as live as ever.  A majority of Americans will not tolerate cuts to Social Security — and they will not support a candidate who does.