Another day, and another poll 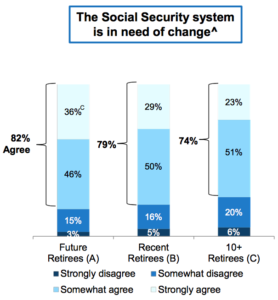 showing Americans are increasingly worried about the future of their Social Security benefits–and their retirement security in general.

Among the poll’s findings:

The Social Security Trustees’ most recent report–something the CBS News article calls the Trustees’ “annual rite of publicizing the year when the program’s fund will be exhausted–“ maintains past findings that without legislative intervention, the Trust Funds will be depleted in 17 years.

And this depletion will necessarily result in a 25% benefit cut for nearly all recipients. For more than a third of beneficiaries, Social Security comprises 90% or more of their total income. For these Americans, a 25% cut would be disastrous.

A vast majority of these poll respondents also demanded an immediate bipartisan fix to this problem before those cuts arrive.

The time to argue about whether or not the Social Security funding crisis is real is done. The time to wonder about the potentiality of cuts has passed. And the discussions about whether a senior a few years away from retirement could have done more to prepare for this situation is totally irrelevant.

America’s seniors are speaking–and they’re asking our elected officials to shift the Social Security insolvency conversation from “if” to “when.”

As in “IF we don’t make changes now, we’ll jeopardize the financial security of millions of seniors,” and “WHEN are we going to do something about it?”