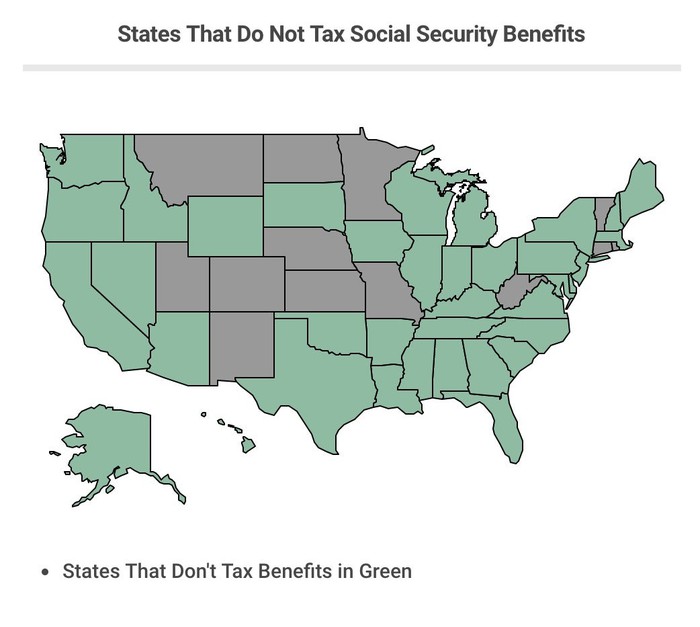 A lot of people nearing retirement are surprised to find out that states can and do tax retirees’ Social Security benefits.  Though this has been going on for quite some time, the majority of us have never had to consider paying state taxes on Social Security.  That’s because only 13 states subject benefits to taxes:

How much and when Social Security benefits are taxed can vary greatly from state to state.  States can have very different policies regarding how they tax benefits.  For example, Colorado partially taxes benefits, Utah fully taxes benefits, and Vermont, West Virginia, North Dakota, and Minnesota use federal rules for benefit taxation.

For those living in the other 37 states, Social Security benefits are not taxable.

But why do some states choose to tax Social Security benefits and others don’t?

The most obvious answer to why states tax benefits is Social Security is income.  States already tax wages, passive income, retirement account withdrawals, and most every way an individual can make money.  These thirteen states view Social Security benefits as one more piece of a resident’s total earnings for the year.  By taxing benefits, these states generate millions of dollars in additional income each year.

But if that’s the case, why doesn’t every state tax benefits?  The answer to that question is significantly less clear.

There’s no real direct explanation as to why most states don’t choose to tax Social Security.  Very probably, residents just simply don’t and won’t support taxing seniors’ benefits—especially since they’ve all paid into Social Security themselves.  It makes sense that most states wouldn’t immediately look to Social Security as an acceptable source of income.

But we can take a look at a variety of factors that might have influenced certain states to start taxing Social Security.

There isn’t a lot of commonality in terms of geography or political affiliation between the 13 taxing states.  There are states that tax Social Security in every region of the country, both Democrat and Republican majority.  But we can see a few shared factors between a handful of the states.

All but a few of these states have notably low taxes in other areas:  Montana has no sales tax, West Virginia and New Mexico have two of the lowest property tax rates in the country, North Dakota, Utah, and Colorado have low corporate income taxes, and Missouri has low fuel taxes.  Many of the states that don’t tax Social Security may have much higher taxes in other areas.

Three of the 13 taxing states have the highest populations of seniors and retirees in the U.S.: Montana, Vermont, and West Virginia.  These states may tax Social Security owing to their large populations of beneficiaries.

It also may have to do with the general quality of life offered to senior residents by the state.  Interestingly, despite being not-so-tax-friendly to seniors, Minnesota, Colorado, Vermont, and Connecticut were all ranked in the top ten best states for the aging by U.S. News.  This ranking factored in things like senior employment opportunities, monthly costs and healthcare quality for seniors, and overall senior cost-of-living and happiness.  While we can’t say whether Social Security taxes are specifically being used for improving senior quality of living or how much these states take their senior populations into consideration when developing tax code, it is worth taking a look at.

Still, it’s largely because of these benefit taxes that many of these states often make the list for the least tax-friendly states for Americans to retire (including Connecticut, Minnesota, and Vermont, despite being friendly overall to seniors).  Unsurprisingly, not one of these 13 states makes the cut for the most tax-friendly.