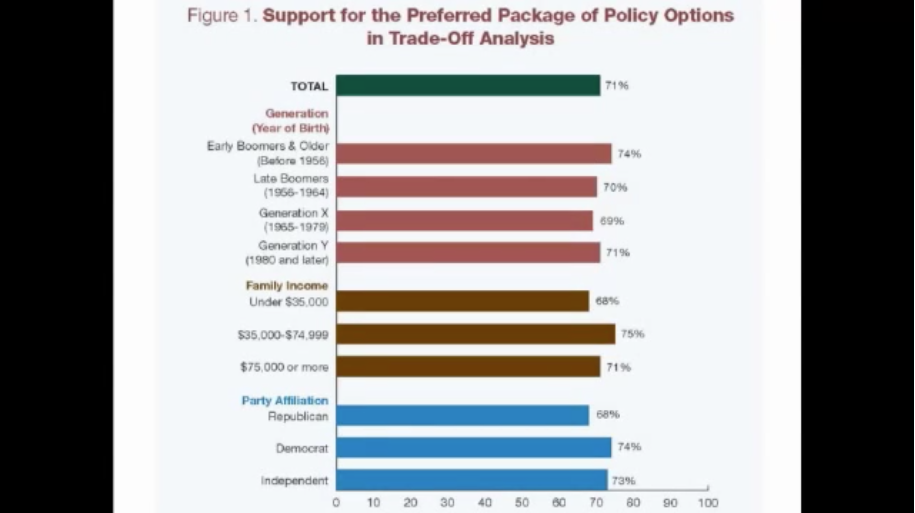 In a 2014 survey of Americans across generational, income, and political party lines, the National Academy of Social Insurance found an uncommon and overwhelming unity on not just the importance of Social Security, but also how the looming funding gap should be fixed.

Using trade-off analysis, respondents were given a set of policy options, the effects of which put them into three categories: revenue increases, benefit reductions, and benefit increases.  Each option included a description and a short explanation of how implementing it would affect Social Security’s long-term financing.

Asked to consider each policy, respondents then weighed their options and selected what they felt created the best policy package for themselves and the millions of Americans who depend or will depend on Social Security (interestingly, this survey found Americans were more concerned about preserving Social Security for the greater good than for themselves or their families).

Analyzing the results, NASI found Americans knew exactly what they wanted from a Social Security reform package, with a majority of respondents selecting four policy options from the “increase revenue” and “increase benefits” categories.

According to their responses, seven in 10 Americans favor a Social Security package that would:

“Scrap the Cap” by gradually raising and eliminating the taxable earnings cap for Social Security (at the time of this survey it was $117,000—now it is $128,400).  This would bring more revenue into Social Security.

Raise the Social Security tax to 7.2% over the next 20 years. This would be a very small increase of about 50 cents each year to most workers.

And raise the minimum Social Security benefit for low-income earners.

Even with the desired benefit increases, NASI estimates this package would actually exceed the amount needed to completely close the funding gap.  These changes alone would eliminate 107-113% of that gap.

Based on survey respondents’ attitudes toward each policy option, NASI was also able to identify which options were the most and the least appealing to Americans in general.

The most positive options included eliminating the tax cap, raising Social Security taxes, NOT raising the retirement age, and boosting the COLA.

Though four years have passed since the announcement of these results (and since NASI Board Chair William Arnone’s little joke about the Washington Capitals—our Caps are the CURRENT Stanley Cup Champions, thank you very much), attitudes about these policies haven’t changed.

Americans are still upfront about their willingness to pay more to keep Social Security safe.  Lifting the taxable income cap is an ever more popular solution to increasing revenue for the Trust Fund.  And under no circumstances do most Americans want retirees to have to work longer and receive less.  The responses to this survey probably wouldn’t look much different at all today.

Which begs the question: what’s so hard about enacting these changes when seven in 10 Americans have told Congress what they want and what they’re willing to sacrifice for it?