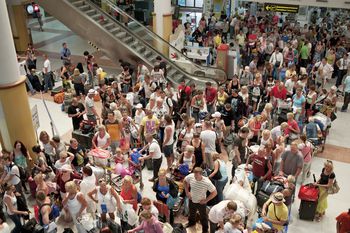 There was a time in the not-so-distant past when all air travel was a luxury. Excited families, important tycoons and international jet-setters felt the accompanying thrill that air travel brought with it. Now, just a few decades later, air travel has become common and “luxury” has taken on new meaning.

From an engineering point of view though, the obvious question is: How do airlines find the room for showers and bedrooms to please first-class travelers? That’s an interesting thought, especially considering the ongoing restrictions forced on economy travelers the past few years. The answer is that comfort has altogether disappeared from Economy Class.

It seems like there is an arms race at the big airlines, making first class more over the top luxurious — often at the expense of the regular passengers traveling in the rest of the airplane. From fabulous suites to showers in the skies, technology has indeed created an environment that would please even the fussiest traveler.

American Airlines (AA), once considered an industry giant, has fallen upon hard times. Blame it on a global recession, blame it on pickier travelers – however you want to spin this, American Airlines is seeing its profits — and its stock price — falling quarter after quarter. Dropping their “More Room Throughout Coach” program, American Airlines has reduced legroom, removed seat padding, and installed mini-toilets that are making flying nearly impossible for older people, the disabled, and people who are carrying a little bit of extra weight.

A Raw Deal: A 787-800 carrier was originally fitted for 160 passengers. Recent plans see 172 seats with the extra 12 stuffed into economy Okay, we’re paying more $$$ for less room. Annoying but expected with the times.

A more pressing issue surfaced: Economy Class Syndrome. We know it as something else: DVT or Deep Vein Thrombosis, a condition that’s actually enhanced by the stuffy conditions of the average economy class carrier. One is typically advised to stretch your legs and go for a walk around economy on longer flights, especially if you’re an older traveller, obese or suffer from Diabetes.

What I didn’t know was that DVT isn’t limited to the obvious candidate. Cancer patients, smokers, people using contraceptives or hormone replacement therapy apparently increase their DVT risks by flying economy under these newer restrictions.

Captain Chesley “Sully” Sullenberg, known for his heroic Hudson River landing circa 2009, emphasized safety concerns regarding health and airline regulation with the reduction in space. At first glance, it may not seem all that important. Indeed, if you’re considered an average-sized person with overall good health, you may not be concerned overly much and have lost interest at this point.

Bear with me… It’s no secret that the global population has not only increased in number, we’ve increased in size. Larger people, smaller seats – see the problem?

A second point Sullenberg brought up adds fuel to the fire: “It is way past time to require a minimum airliner seat size and that evacuation demonstrations reflect reality. Lives depend on it.” Note the keywords: “realistic demonstrations not just simulations.” Can you and the other 171 passengers safely deboard during an evac?

The bottom line: less room/more seating implies a greater profit margin for the airline, possible DVT for a number of passengers, and failing that, a longer evacuation period for you and your loved ones in case of an emergency landing. AA believes it’s a risk worth taking. Do you?