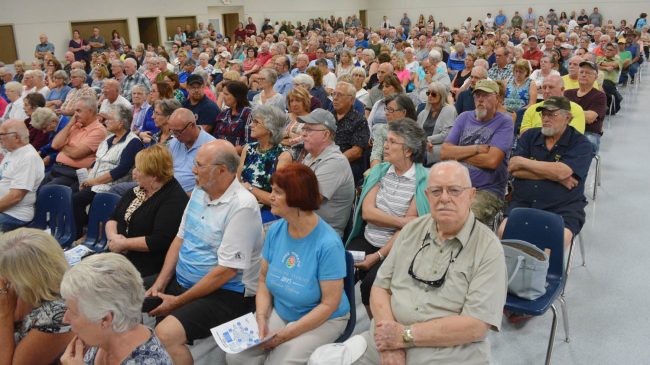 There have been a lot of angry words in the six weeks since Senator Marco Rubio introduced legislation to pay for parental leave for young families with money from the Social Security Trust Fund.  We have strong opinions ourselves, here at The Seniors Center — we’re outraged by the Rubio plan.

But we wanted to be fair.  So we hired an outside writer to do her own analysis of the Rubio plan.  She didn’t give us permission to share her name — and it makes sense to us.  We’re presenting her analysis just as she wrote it so you can decide for yourself.  Do you agree with Senator Marco Rubio or with the Senior Citizens who are trying to preserve the Social Security Trust Fund in its current form?

The Social Security Act of 1935 was originally created to provide retirement benefits to retired workers at the age of 65. Later, in 1939, Congress extended benefits to spouses and also minor children of retired or deceased workers. Disability insurance followed in 1954, making families of disabled workers eligible. Senator Marco Rubio (Florida) is proposing that Social Security benefits be used to fund Parental Leave for up to three months for birth or adoption. He says that his proposal is a way to deal with economic insecurity in the modern era. The conservative group The Independent Women’s Forum (IWF), who created the blueprint for Senator Rubio’s minimizes the effect of the proposal to the Social Security Fun by indicating that only a small percentage of workers, estimated to be about 2 million annually, will be paid 7 billion dollars in benefits compared to a 950-billion-dollar total annual payout of benefits to eligible workers and their families. Both Rubio and the IWF see no issue with the proposal and maintain the Social Security Trust has been paying out early disability and survivor benefits for years.

Opponents, including Senior Citizen organizations and watch groups, who are not against Parental Leave, but simply do not believe that Social Security benefits should be diverted for Parental Leave because the system was not designed for this purpose nor is it robust, stable, and strong enough to provide funds for Parental Leave. The Urban Institute, a liberal think tank, also oppose the proposal because they believe that it could undermine Social Security’s ability to even ensure basic retirement security for all Americans, and further, this plan could potentially be asked to extend payments to people to pay their student loans or to finance their adult education ambitions.

FMLA (Family Medical Leave Act) guarantees 12 weeks of unpaid time off for government and employees of companies with 50+ employees. Currently, FMLA is primarily used to care for sick people or for the themselves for serious illnesses, not childbirth or adoption. Three out of four people need to take care of a sick or dying parent – will get nothing. It’s ill-advised to cover an emergency today and get Social Security benefits cut later. This plan presupposes a benefit that might never get paid. What if someone never returns to the workforce to continue paying into Social Security, or their earnings are significantly reduced or stagnant or even inconsistent over the years that they should be paying into Social Security? How do we know what anyone will get in 15 years?

I believe that using Social Security benefits to fund Parental Leave withdrawals to be repaid later down the road at retirement eligibility with a delay of 3 to 6 months for those retirement benefits to be paid puts a less than stable system at serious risk and jeopardizes benefits for millions of workers who rely on the fund for survival. Although Rubio touts that the proposal doesn’t expand government, add new taxes, place mandates on business, create a new entitlement or crowd out existing benefits, but instead helps new parents stay in the workforce. The history of Social Security funding does not support his reasons. In fact, it’s quite the contrary.

In 1972, Congress passed legislation to create annual cost-of-living adjustments for benefit levels, with previous increases being intermittent. Payroll taxes, and the amount of income eligible for payroll taxes was raised in 1977, and benefits were reduced slightly.

In 1983, Congress moved eligibility for full retirement benefits from age 65 to 67, increased Social Security tax rates, and added new taxes for the benefits of the wealthiest individuals, with a goal to create a surplus over the next few decades in anticipation of the inevitable drain from the coming baby boomer retirement.

The reality is that funding shortages will continue to happen as the current system is a pay-as-you-go funding where each generation of current workers is paying for the benefits of those currently receiving benefits.

Rubio’s proposal seems too simplistic in that it supposes that each individual who withdraws funds for parental leave would be paying for it themselves, rather than payroll taxes being raised on everyone else to help pay for it. However, it fails to take into consideration the changing demographics that have made funding surpluses improbable. With a growing baby boomer cohort nearing retirement age and extended lifespans, benefits will be paid longer. Coupled with decreasing births, fewer workers are paying into the system to support more retirees. Although the size of the Trust Fund for retirement and survivors peaked in 2011, it is now in a decline, and the fund for disability benefits is expected to run out in 2016. As late as 2015, the Trustee’s Report predicts 2.6 contributors per retiree by 2030, and a drop to 2.2 with disability benefits included. Therefore, there are not enough new contributions to deliver promised retirement benefits. Currently, the Social Security Trust Fund is expected to be depleted by 2034.

So, with drastic cuts in benefits, increases in taxes, or borrowing from the rest of the government’s budget expected to mount in subsequent years, Rubio’s plan is not feasible. Therefore, Society Security benefits must not be used for Parental Leave.