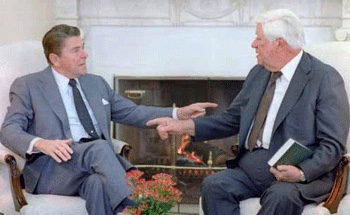 30 years ago, Republicans and Democrats came together and fixed Social Security for a generation. It’s critical that they do the same thing now.

The polarization of American political parties has been highly visible over the past year as Democrats and Republicans have vehemently and viciously disagreed over policies. Developing a bipartisan solution to fixing a social or financial issue in the United States has proven to be difficult. The United States faces a plethora of issues all around the social spectrum, from gender identity to abortion. On top of those social issues, lie financial situations that political parties tend to take a hard stance on such as minimum wage and progressive taxation. One area where a social and financial concern may be solved in a bipartisan manner is Social Security.

The harsh reality is, beginning in 2018, Social Security costs exceed total income. This trend is projected to continue into the future causing asset reserves to be depleted by 2034. After the depletion of the reserves, the incoming revenue will be sufficient to support expenditure costs at 79% of program costs through 2092. As the majority of retirees are dependent upon Social Security checks, this necessitates a 21% reduction in benefits or radical reforms to the program.

While Social Security is not a Ponzi scheme, considering fraud and deception are not being committed, it operates under some of the same guidelines as new investors supplement payments to retirees. The concept of Social Security is quite simple. Money is pooled together through mandatory contributions from workers and their workplace; that money is then disbursed to eligible participants. Basically, when you work, you pay money into a pool that gets paid to retirees. When you retires, you receive money from those who are working… this is the cycle. The problem now is that Congress has spent the Surplus that was supposed to pay for baby boomer retirees and the retired population is growing at a faster rate than the working-age population. This combined with increased life expectancy places brutal constraints on Social Security.

At the time Social Security began, life expectancy was an additional 12.5 years. As of 2016, life expectancy is roughly an additional 19 years8. With the advent of new technology and access to better healthcare, life expectancy is projected to increase8. This sparks the Republican idea of raising the full retirement age where workers will be given the choice of working longer to receive their full payout or taking the payments early at a lower amount. Either way, it reduces the cost of Social Security. Democrats are pushing for raising or lifting the income cap. By raising or lifting the cap, Social Security would have more income to tax which would turn into more income to disburse.

The logical and bipartisan approach would be to raise the full retirement age and to raise or lift the cap on the maximum taxable earned income. To what levels become the questions. With Republicans and Democrats working together in unison, this may become an optimization problem with a budget constraint. While difficult, the optimization problem would be much easier to attack should all of bureaucracy and litigation not be involved.

The truth is, regardless of the situation, some group of people will be worse off. If the retirement age is raised, unskilled laborers and future generations are worse off. If the maximum taxable income cap is raised or lifted, the rich are worse off. This becomes government’s job of making a decision for the greater good. If both parties worked together, maybe the full retirement age is just slightly raised and the maximum cap is just slightly raised rather than one or the other being drastically changed.